Authentic Elotes, also known as Mexican Street Corn, is covered in garlicky mayo and topped with Cotija cheese, cilantro, and chili powder. This recipe is simple, and creates a flavor combination that’s salty, nutty, creamy and tangy all at once. It’s the perfect summer side dish for your next bbq or outdoor grilling!

I have been seeing the first bushels of corn show up in the grocery stores around here lately, and that is probably the real herald of summer for me, even more than school being out and the days getting hotter. You have probably had grilled corn on the cob before, but today we are taking it up a notch by making Mexican Street Corn.

A common Mexican Street Food, also known as Elotes, the grilled corn is slathered with a mixture of cotija cheese, Mexican crema, chile powder, and lime and then topped with more cheese. This is THE summer BBQ side dish and its addictive. There is no better food that perfectly embodies summer than grilled corn, and this is definitely a special recipe!

Serve it with chicken enchiladas, a carnitas taco bar, or refreshing watermelon margaritas and then go full siesta mode. The lazy days of summer are here!

Elote (pronounced eh-loh-tay) means corn cob in some regions of Spanish speaking countries. They are a popular street food in Mexico often sold in food trucks where the corn is grilled. Usually, the corn is cut off the cob and sold in cups known as Elote en Vaso (Corn in a Cup) or Esquites (Corn Salad).

Here is an overview of what you will need with notes about ingredients and substitutions.

Cotija Cheese: This cheese is white, crumbly, salty, and doesn’t melt well. This is the traditional option along with Queso Seco, but only the specialty stores carry it here. If you can’t find it, Feta is the closest substitution.

Corn: Since it is grilled, you will want the cob. I have successfully grilled frozen corn on the cob, but it needs to thaw first. I prefer to grill ours without the husk on to get a little charring on it.

How To Choose Good Corn? First, always remove the husk at the store or at least peek at the corn. The silks (hairlike projections that come out of the top) should be brown and sticky to the touch. If they’re dry or black, then it’s old. If they are bright yellow, it’s not ready. The husk should be bright green and wrapped tightly.

Sour Cream & Mayo: Any brand you prefer should be great in this recipe, either full fat or light. This is actually a substitution already for Mexican Crema. Mexican crema is similar to sour cream, but it is higher fat, a little sweeter in taste, and a lot thinner.

Step by Step Preparation and Variations

1. Grilling Corn without a Husk

This is my recommended method for best flavor. It’s the easiest too since any bits of silk will burn off. Brush the ear with a little oil if you like, then place it on the grill about 8-10 minutes, turning regularly. There will be some nice char on the ear itself, which adds to the smoky flavor!

2. Grilling Corn with a Husk

The grilling is essentially the same as without a husk.

3. Mexican Street Corn without a Grill

If you are lacking a grill (or maybe its just too hot outside to fire it up) and you are craving this, no worries. Making Elotes with no grill is still possible! Here are a few options:

Serve: Hot off the grill. I usually time this recipe to be ready with the entrée or just before. I like to add a squeeze of lime just before serving. It adds a fresh zing that livens up the flavor even more!

It is normally served as either a snack or as a side dish. I love it for family BBQs because it’s so easy and different. You could serve it with:

And don’t forget dessert! 15 Minute Punchbowl Cake, Key Lime Pie, and Carmelitas are some of my all-time summer favorites.

Store: I usually only grill what I need and store the toppings separate. However, if you do grill extra, wrap the corn tightly in aluminum foil and store in the refrigerator. Lasts 3-4 days. For reheating, it’s best to cut the kernels off the cob before refrigeration, but you can microwave the full ear as well.

What is Cotija cheese?

Cotija cheese is a tangy, salty grating cheese that is the traditional topping for Elotes. It is sometimes aged and called Anejo. Since we are using the fresh version, use Feta as a substitute. Sometimes I also use Parmesan and it is also delicious.

It isn’t overly spicy, but it does have a slight kick due to the chile powder. It is toned down by the cheese and creamy sauce. If spicy isn’t your thing, add smoked paprika and chili powder are best. It still has all the rich red color without the extra spice.

How do you pronounce Elotes? 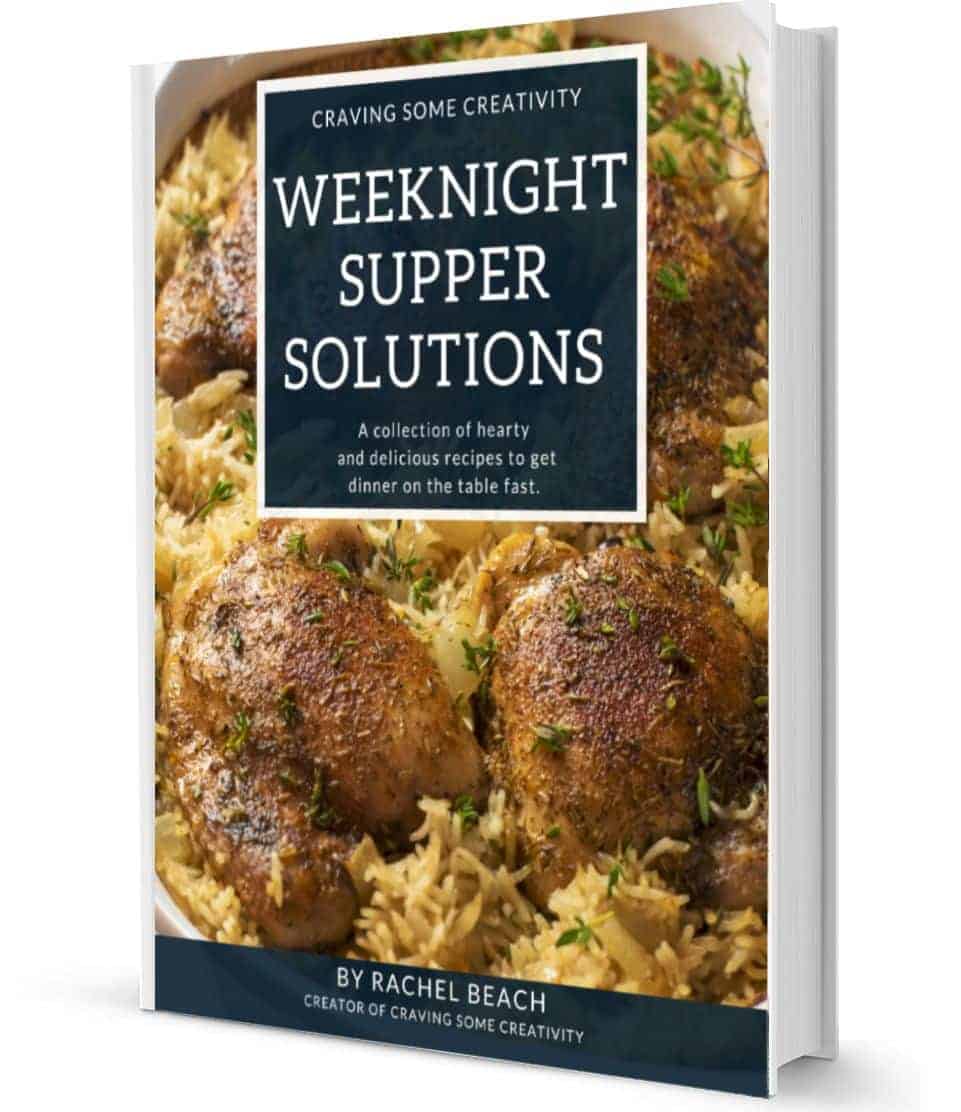 Not Sure
What's For Dinner?

Signup for recipe updates and get a free cookbook of Easy Weeknight Supper Solutions!

More Delicious Recipes You May Enjoy

PS. If you make this recipe, leave a COMMENT AND A STAR RATING in the comments section at the bottom and be sure to take a photo and tag it #cravingcreative on Instagram! I appreciate you for taking the time to read about me and my family recipes. 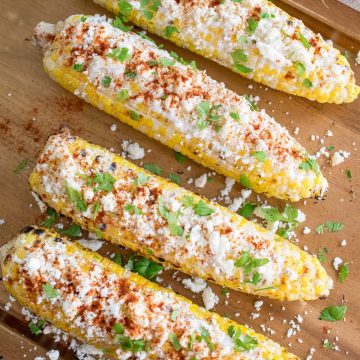 Elotes (Mexican Corn on the Cob)

Grilling Corn with a Husk The grilling is essentially the same as without a husk. The preparation is slightly different. Mexican Street Corn without a Grill  Here are a few options:

Creativity makes me energized and fearless. My husband and I have been renovating homes for over a decade and love to share our passion for all things home. Follow along for remodeling tutorials, recipes, and entertaining ideas sure to inspire!