Love a herringbone pattern tile, but worried it’s not easy to create? It’s no harder than other subway tile patterns with this step by step guide that shows how to measure, mark, cut and lay the tiles for a perfect job.

I’ve been getting many questions about the bathroom remodel at my parent’s house, most specifically comments on how intricate and beautiful the herringbone pattern inset is on the shower. We have a post about all the many subway tile patterns you can do, but herringbone is one of the most popular. Quite a few mentioned that herringbone must be so difficult to lay, but that isn’t the case!

You will need mostly the same general tools and supplies for tiling herringbone vs other patterns. Here is a handy list of some of the items I use and recommend.

With any pattern, especially intricate ones, use tile spacers. I usually keep two kinds on hand – T-shaped like these and Wedge tile spacers. I much prefer the T-shaped ones over other shapes like these cross ones, because the T fits well into staggered joints and they are easy to remove. Wedges come in handy because you can trim them to size, so I use both.

I don’t usually lay tile out before putting on the wall, but it is recommended. Normally, it’s very difficult for me to have a large enough flat surface to everything exact to make the correct cuts before laying on the wall. So cuts are performed as I go.

Always cover and pad anything you don’t want scratched or dinged in case you drop a tile or mortar. In a bathtub or shower pan, I lay down folded towels and then cover with a plastic sheet that is taped around the wall.

The mortar will harden fairly quickly when it is on the Hardi-backer or other substrate. For intricate patterns or if you are very slow, I recommend spreading the mortar/adhesive on the back of the tile rather than putting the mortar on the wall.

How To Lay Herringbone Tile Pattern

The first step in laying a herringbone pattern is to find the center point of the wall. Measure the length of the wall and mark the halfway point.

A floor layout is different than a wall. On a floor, you start in the center and radiate out towards the walls on either side, on a wall, we start at the bottom because gravity might cause the tiles to slip downward, ruining your pattern. You can either start at the bottom or use a ledger board in the middle. A ledger board is just a very straight board you screw into the wall that the tile can rest on. When you are done, unscrew the ledger board and tile in its place.

Step 3: Add a ledger board

Step 4: How to Lay the First Tile

The first tile is the most important because it sets the pattern for the rest of the tile. In order to make the pattern perfectly even on both sides, start it like the picture below. To get a 45-degree angle, use a combination square (without the ruler) or draw a line with a trim square.

If you have the space, I recommend laying your pattern out on the floor so you can make cuts before laying the tile on the wall. I usually cut about 6 rows at a time once the pattern is set.

Step 5: Continue up the wall

One neat thing is that once you get that first piece exactly right in a herringbone tile pattern, and start tiling up, the side cut pieces will all be the same size! This is, of course, assuming the walls are straight.

Pro Tip: Every few rows, check for level by putting a level across the top points of the tile. This means the tile hasn’t set long enough so adjustments can be made.

So that’s it! It’s not any harder than other tile patterns once you get that first tile set. I hear a lot that tiling scares beginning DIYers, but it’s actually one of the easier – though tedious – projects to do. If you can get the walls up straight, tiling is a breeze.

We have tiled several project tutorials including installing groutable vinyl tile, LVT floor tile, and tips for using beveled subway tile. I have even more tiling projects and videos coming up so stay tuned!

What direction is herringbone tile layed?

Herringbone tile is usually laid at a 45-degree angle to the floor or wall that it adjoins. This orientation looks similar to arrows pointing straight up or down. However, it can also be started horizontal, which gives the illusion that the floor moves diagonally.

Does it take more tile to lay herringbone?

Yes. With a geometric pattern, there are generally far more cuts involved. When calculating how many tile you need, go with at least 15% for herringbone and 10% for a straight lay.

What size tile is best for a herringbone pattern?

3×12 tile was used in this particular project. However, 3×6 and 2×4 work well too depending on your look. You want a tile where the longer side is evenly divisible by the shorter side (i.e. 12 divided by 3 =4 in our case). While you can use any size tile theoretically, divisible sides are easier to work with.

To some degree. Herringbone has an effect that seems to expand the width of a room or wall. Because of this, herringbone floors are good choices for small spaces like laundry rooms or powder rooms. The effect works best in square spaces.

Hope you find this inspiring, because I look at that picture and it looks so comforting and relaxing and modern.

PS I love seeing your creations! Be sure to take a photo and tag #cravingcreative on Instagram! You can also stay in touch with me through following me on Instagram, Pinterest, and subscribing to the newsletter! 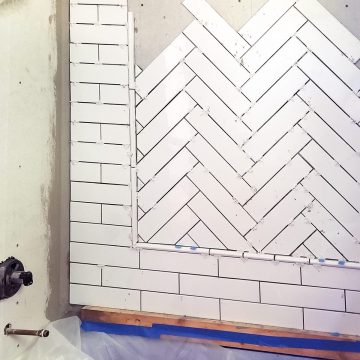 How to Tile a Herringbone Pattern

Does it take more tile to make a herringbone pattern? Yes. With a geometric pattern, there are generally far more cuts involved. When calculating how many tile you need, go with at least 15% for herringbone and 10% for a straight lay. What size tile is best for a herringbone pattern? Herringbone pattern only works with tiles where the longest side is relatively divisible by the shortest side + grout width. A  3 x 12 tile works best. However, a 3×6, 4×12, or other variations will work, but look slightly different.  With any pattern, especially intricate ones, use tile spacers. I usually keep two kinds on hand – T-shaped like these and Wedge tile spacers. I much prefer the T-shaped ones over other shapes like these cross ones, because the T fits well into staggered joints and they are easy to remove. Wedges come in handy because you can trim them to size, so I use both.
Tried this Project? Tag me Today!Mention @CravingCreative or tag #CravingSomeCreativity!
« Rustic Modern Bathroom Makeover
Shortcuts for Fast Meal Prep »

Creativity makes me energized and fearless. My husband and I have been renovating homes for over a decade and love to share our passion for all things home. Follow along for remodeling tutorials, recipes, and entertaining ideas sure to inspire!