Since I moved to DC, one thing I have noticed is the store cult crowd. People’s eyes will gloss over at the mention of particular stores like Wegmans Grocery Store,  Pottery Barn, and Georgetown Cupcakes. Seriously, people drive 2-3 hours to visit the Wegmans. (I heart Wegmans btw but I am not a fanatic). Ikea is also one of those stores with rabid fans who love their modular furniture and cheap prices. However, reviews of an Ikea store aren’t helpful. They are mostly written by such fans who seem to think that everyone has an understanding of what a trip to an Ikea store is like. I, simply, didn’t get it. I see cube and build your own furniture at Target, so what’s the diff?

So I went undercover to figure out what is so special about an Ikea store. I am not affiliated with Ikea in any way so this was totally incognito. If you have been to an Ikea store, I will hope that you will indulge my cluelessness. I tried to make a shopping list prior but, honestly, I couldn’t work the website with all its flowery Swedish names. My searches included “stacked box thing” and “closet thing for shoes”. Useless.

So in the doors we go! The first stop is this handy-dandy little helper station. I grabbed one of each. The pencils and paper measuring tapes are seriously genius! Why don’t other home stores offer these stations? There is a 1-hour kid zone (aka free babysitting) but we were too afraid to partake. I have a serious fear of the parent walk of shame…hearing your name called over a loudspeaker to attend to your child. Excruciating.

A ride atop the escalator whisks us to the upper level, aka the showroom level. As I discovered, this store has 2 levels + a warehouse. The entire is store is 300,000 square feet so bring walking shoes. The store layout made it seem as there is only a one way flow through the massive store, so if you know what you want you may want to purchase it online. The showroom level is, as you see above, a collection of rooms setup with Ikea products. If I were to guess, it felt like there were at least 60 or more individual rooms. You see something you like? Write the number, aisle #, and bin on that handy-dandy paper from the station. A few tags were missing but I think that EVERY.SINGLE.THING. you see in those showrooms can be purchased at the store. Way more than modular furniture.

Of special note is the closet section. There are computer stations equipped with design studios to create the Ikea closet of your dreams. You can also use these design software programs on their website here. My phone hated the lighting in this area so some of the pictures aren’t the greatest.

Ikea is smart. They want to keep us bright-eyed home decorators shopping away and they know it’s a massive store. They have an easily accessible cafe right in the store if your tummy starts to rumble. And the food is pretty reasonable in price.

So after we have wandered our way through the showroom level, the next level is called “The Marketplace”. As the name implies, this level is where you purchase all of the smaller goodies like lighting, dishes, and decorative touches.

Let someone else carry the pocketbook. You will find yourself picking up 10 picture frames, 4 vases because you suddenly want to change the living room color scheme, and a comforter only for laundry day. And then you agonize over it, put it back, and then pick it up again 5 minutes later. Remember though, you can always purchase it online later.

1. There is a really neat kid’s toy section with simple toys like tents and build your own wooden race tracks (so much more durable than those hotwheels ones but I don’t think they do loop-de-loops).

3. There is a Swedish food mart stocked with goodies you can’t pronounce but look gourmet and delicious.

4. There is an AS-IS department too. Discounts and completely assembled floor models abound.

The last stop on the tour was the warehouse. Remember those numbers we wrote down earlier from the showrooms? These are the aisles and bins they refer too. This is where one would pick up any furniture or large Ikea items.

I am so glad I went to be honest (and that I dragged my husband along too). I loved the room setup idea, that gave me more inspiration than I ever would have had in a box store. I love the style and the feel of the shopping experience. The best way I can describe it is like a tourist attraction for home decorators.

Was there anything I didn’t like about Ikea? Well, we were exhausted by the time we left. Hubby was longing for the nearest hamburger and beer joint, pronto. The scale of the place was a bit much and my son had to be carried by the end of it (we spent nearly 4 hours walking inside the store.) Also, there were some really cute FJÄLLA storage boxes that I wanted but every one of them was beaten up pretty badly. They were made of thin cardboard so it was a little too cheap to me. 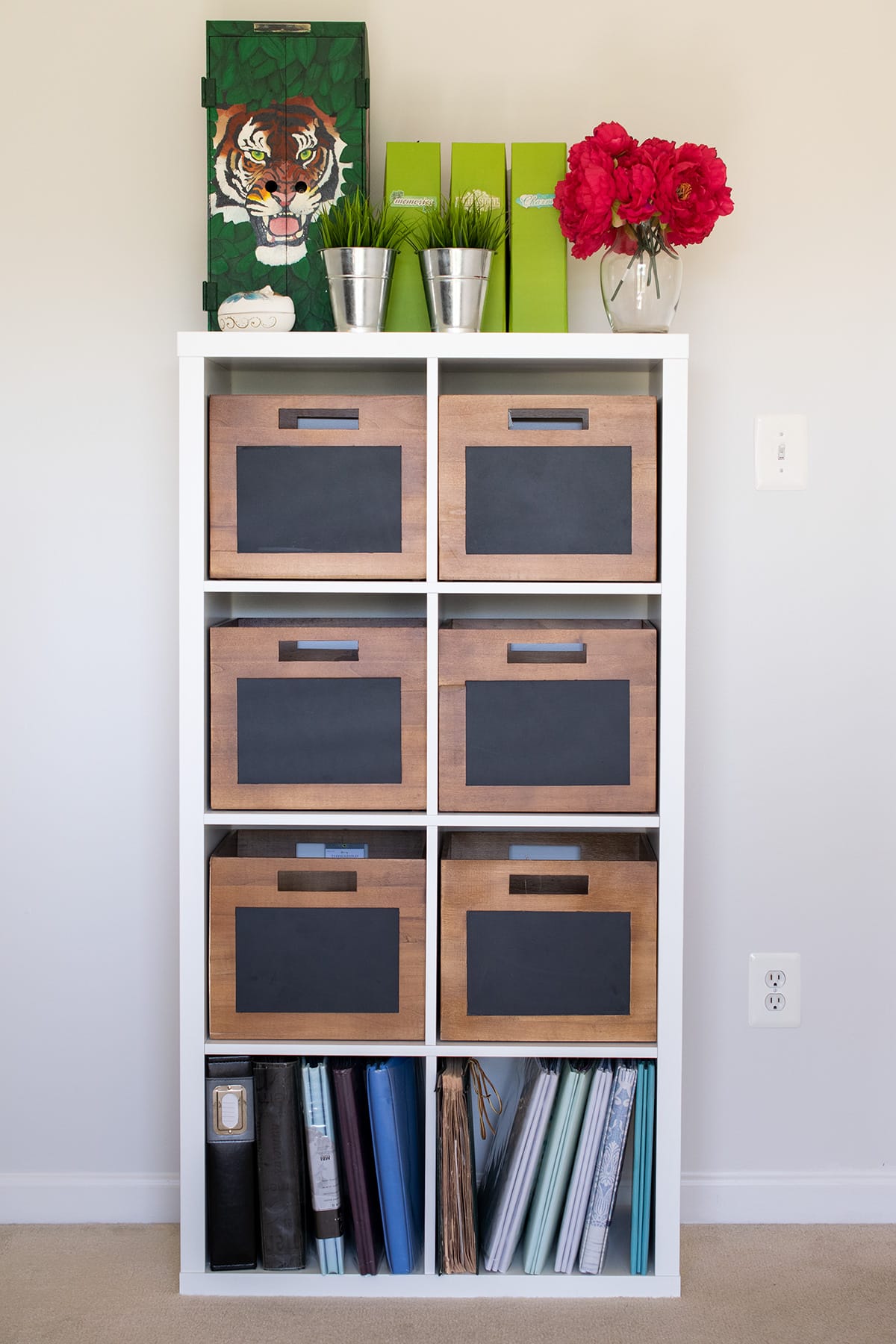 My “stacked box thing” has a name and that name is KALLAX! I am now the proud owner of a Kallax storage unit for my craft room! The grass plants (FEJKA) and the little metal buckets (SOCKER) were also purchased at Ikea. The chalkboard/wood storage crates came from Target. Yes, a really long-winded story about how I bought a Kallax, but the store itself was too much to not share, lol.

Looking for something? Search this site.

How to Paint Your Garage Floor

Stuffed Shells with Ricotta and Sausage

This post may contain affiliate links, for which I may earn a small commission in the event of a qualifying purchase.

Looking for Something? Search This Site